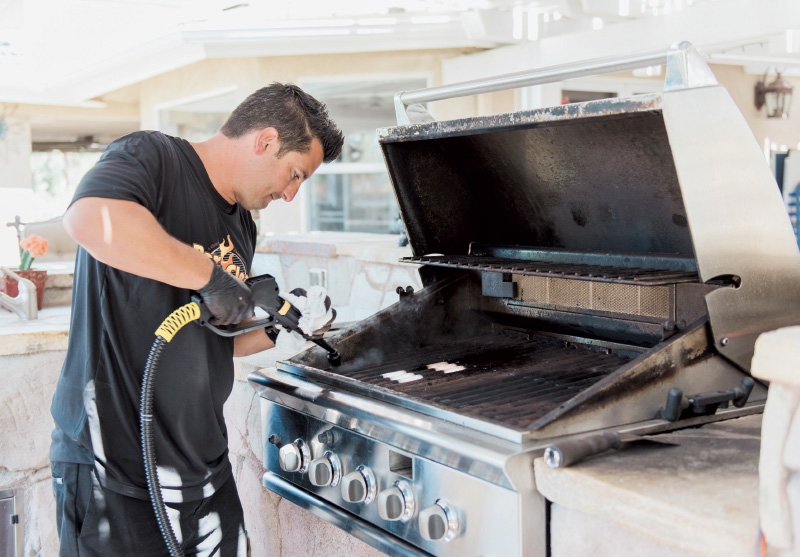 What’s the grossest thing you’d do for money? The possibilities are endless for parents of young children, pet owners and Fear Factor fans, but a young barbecue-cleaning franchise is asking that question of its courageous franchisees.

Year-old hamburger bits? Check. Mouse droppings? No problem. Dispatching furry or feathered inhabitants before hand-cleaning a nasty grill back to like-new condition? That’s the name of the game at Bar-B-Clean, a California-based franchise taking the dirty work out of the grilling season.

“It was born out of necessity like all other great things,” said Bryan Weinstein, founder and CEO of Bar-B-Clean, about starting the company in 2010 after discovering a lack of choices to clean his own family’s grill. “With 30 million people in Southern California, only one guy was servicing and cleaning barbecues.”

Three years after launching Bar-B-Clean and diving into the grill-cleaning business with his own glove-covered hands, Weinstein franchised the company after seeing potential to bring this concept throughout the country. As he and his crew quickly discovered, the population of grilling enthusiasts exceeds the number of backyard chefs willing to pull up the grates and clean away the remnants of barbecues gone by.

Aside from the obvious grunge factor, carcinogenic chemicals can accumulate in grills, which are then released with the application of heat. The clear implication is that what may be lurking under burners and covers isn’t just gross, it’s also a clear and present health danger.

“I don’t like to talk about it either, other than to educate the customers … but it’s something people need to be aware of,” he said.

According to Bar-B-Clean’s most recent FDD, the average unit volume was $89,105 during their first full year in the system. Since then, Weinstein said, his franchisees have seen growth in the numbers. All-in startup costs are estimated at $25,000.

Whether or not you’re enticed enough to dive into the grill-cleaning biz, Weinstein hopes as more people learn the virtues of a clean grill, attracting franchisees will be the easiest part of the job—especially by comparison.